We have moved this blog into a better location.

Yes that's right after a struggle of nearly 8 months a new blog has dawned.

Where did all the things go ?

Well if you have been wondering what happened to posting updates etc., I have been posting but at a different place:
https://gist.github.com/boseji

My new found love with Markdown has taken me there. 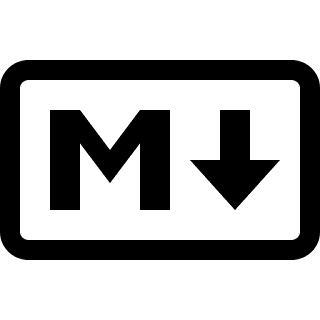 Its so easy to use and friendlier than writing in blogger. Plus it actually can do all the same formatting and even better with code.
Well hope some day Google might listen to me and update blogger to support Markdown and publishing like Github.

Till the check out my work at :

Look like we are at the end of very eventful year 2016. Lots of twists and turns on the way to reach. Wish you a Very happy new year 2017! 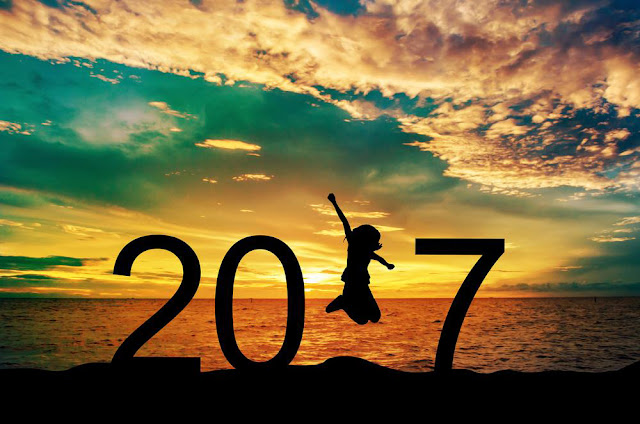 We went through lots of projects and lets have a look at what we have through one by one.

This was project to create a programmable RF platform with LoRa and generic ISM band RF communications. This project has been successful to some extend but still has a learning journey ahead. The project suffered several setbacks due to problems due to the selection of the DRF1276G as a target platform for LoRa. However the ISM band radio using RFM69HW has been quite a success.


These are the RFM69HW board with the base RF-Udaan project board. They work great with simple Wire antenna and have good sensitivity of around -98dB considering the adhoc soldering and wire antenna.


These are the pictures with the DRF1276G module and a Right angle 2dBi rubber duct antenna. They don't perform as good. Possibly due to the RF driver being used or some issues with the hardware. Investigation is still progress.

We have already sent out the next version of this board called RF-Udaan2 as many of you might have guessed. We are migrating the LoRa setup to Microchip's RN2483 module without any further delay.
Also we would be evaluating the RFM95 which many people have recommended. We also have a special surprise design where in the RFM69HW board will become intelligent and will have ESP8266EX connection capability. But that towards 2017, keep a watch.


This has now merged into the RF Udaan project as both have similar radio. Just so that you remember by protos:

Presently doing RF Power to battery life evaluation tests. In fact I published some of my initial code for a Low Power execution in a Gist: https://gist.github.com/boseji/d4e031aa7ec14b498a7a6a1efedf6d55

This gives an Arduino Sketch where we can check low power consumption of the ATmega328P chip. Though there is problem that it can't be programmed without a ISP programmer. So I converted one of my Arduino to an ArduinoISP and then programed the Pro Mini board from that. But after getting stuck multiple times I used my old trusted Atmel MKII programmer.
So still a working progress. I will update some of my findings that might surprise you. Watchdog in Atmel is great and the Power Shutdown though not very feature rich like the MSP430 is still good. No wonder the ATmega328P is called a Pico-Power chip.

The measure currents are down to 12uA with full memory retention and on-board power hungry LDO on the Pro Min + RF Udaan + RFM69HW board.

That's a remarkable feet. More on this in the coming posts.


Work is progressing on this albeit slower than other projects. Checkout some of my initial examples in the 99_..... directory of the Github repo.

I have now resolved to create a small Thingspeak like service that can be hosted in the local PC or on a simple Raspberry Pi to be able to upload and represent data. Open source web server using golang that can be used to upload data from ESP8266EX. Hope that if you keep checking my play ground repo then you might find some useful pieces of Golang code that you might use for your projects.


This project though successful on my side, is still stuck due to non availability of hardware in the location where my friend lives. I have tried to port the library to get it running with the cheap GSM modules but no luck yet. Will be trying to ship some SIM900 boards to solve the problem.


Hope that with renewed spirit in 2017 we would have more projects to discuss and continue where we left off on many others. As always your feedback and support is always welcome.

This is boseji signing out 2016, and see you next time.

Well looks like its late again. About time we should call it a Biweekly update. Sorry about that first stuck with drivers for SX1231 and then lots of soldering on the way.

Also blogger for a change got updated recently. That's interesting, apart from blogger all other things Google have been modernized and made a lot AI.
My project to create a Golang based site generator, still needs to come out of being a paper drawing to a functional Go program. Till then I have to stay with blogger.

I had to do a lot of soldering to come up with the prototypes. Though the boards arrived 2 weeks back I think on 17th or so, it took me quite a while to chop them into pieces.
Thanks to Dangerousprototypes & Dirty PCB team for the great PCBs. Although this time around there were a bit of drill offsets all over. But my thumb rule of 20mil+ annular ring saves the day.

Its late mid week, but had to. Got busy with illness, work and failure. But for the effort invested it was worth the time. 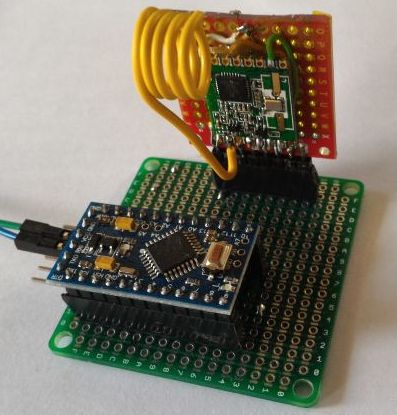 This is a picture of the RFM69HW + Arduino Pro-Mini protype.

Well last week and first part of this week is what I am going to cover here.

As you have see above I have tried to make some protos after my successful experiment last week.
Here is the Proto that I had built with Old version of Seeeduino (v2.21) : 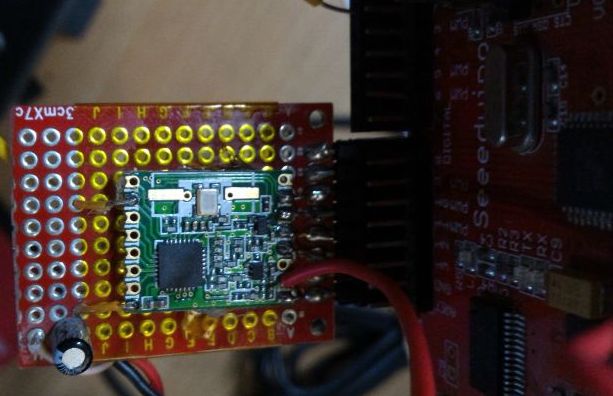 The picture is quite dark, sorry for that. Its basically a RFM69HW module soldered on to a general purpose board and then inserted into the Top Right connector of Arduino. And the red wire in front is the antenna. Apparently it broke off twice so I had to finally add some heat glue to fix it.
The best part is using a RTL SDR I could capture the transmission.

Well of course you would remember one more proto using Arduino Micro: 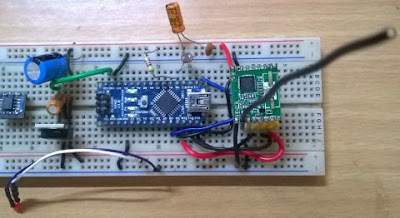 So now with 3 Nodes transmitting the dance of the frequency spectra is awesome to watch.

Here are some Detailed pictures of the RFM69HW board with Arduino ProMini : 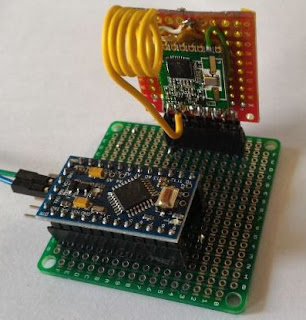 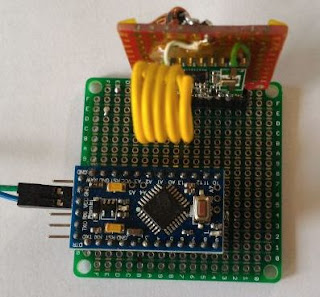 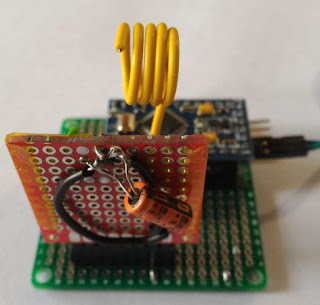 This time I had added an XC6202-3.3V regulator that is used to power the RFM69HW.
Hope that the PCB boards from DirtyPCB comes soon both LoRa and RFM.

This is the LoRa board that includes the DRF1276G module. Again waiting to get both the modules as well as the PCB board.

After getting no where with HUGO, Pelican and Jekyll, I got an idea to write my own. Well that might be a bad idea but a good learning exercise. So some basic work is done on that too. Secretly working with golang since its the fastest and easiest for connectivity. The awesome part its a EXE which is very useful for people like me. I come from hardcore C and Assembly background. So any language that gives net connectivity within 5 lines and give Binary output is great. No framework or Virtual machine needed. Well hope that this would be another good exercise to learn the next generation language.

A friend of mine asked me to design a GSM control relay. So I have started working on that too.
Currently using a Arduino UNO and a iComSat SIM900 Shield from iteadstudio.

SMS read was easy to do, now planning to make the interpreter part also.
All code would be posted soon, so watch out.


That would be all for this update, hope to see you next time.