All tinkers and hacker like Arduino, we too like it. However some project demand drivers to be developed in the Atmel Studio 6.x for the need of performance and custom IP needs. We have been handling several projects like that for our partners. However whenever production programming comes in question we always tend to use Linux machines. This time around we needed to use a Windows machine instead. We were troubled by the non-availability of avrdude like programming front-end and USB driver issues for programmers. We found one solution by using Atmel's programming back-end. Still every production PC needs to run the full blown version of Atmel Studio 6.x which in itself is a big software. We made it to work but were not satisfied. We liked our good old trusted avrdude from our WinAVR days. So we kept scraping the forums and interacted with our fellow tinkers. Our efforts were paid in full. That's why we would like to share this lesson we learned with you so that if you ever encounter this problem this might be your solution. 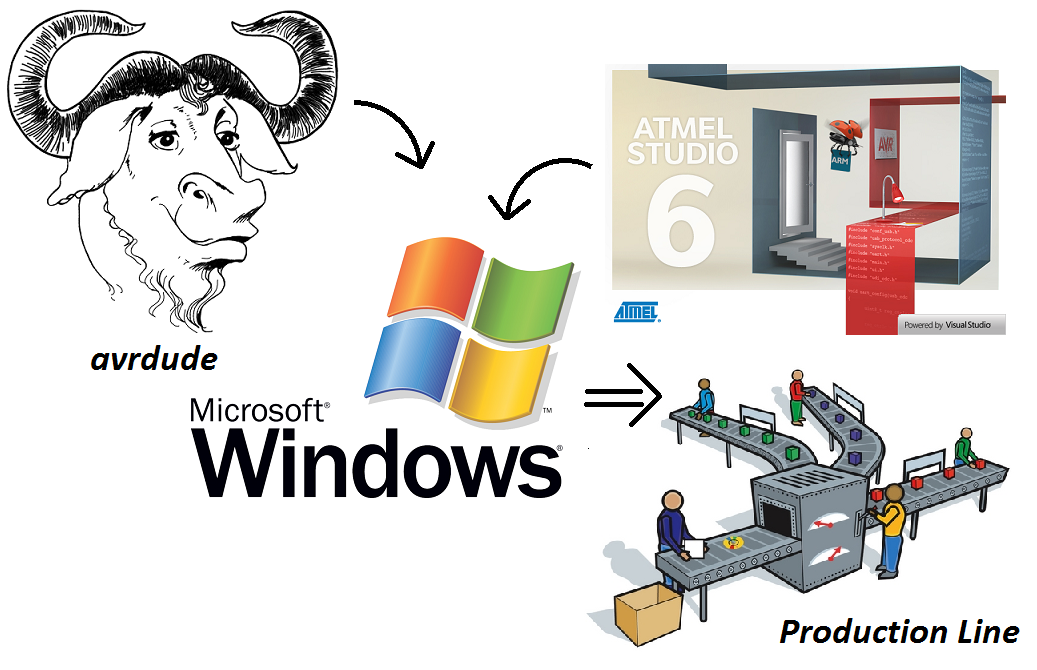 In this tutorial we would be using the standard production capable programmer 'AVRISP mkII'. Of course the same goes for its clones and all other programmers supported by Avrdue. The main problem being support of USB AVR programmers for Avrdude on Windows.
We have taken this example since we could not get the clones or the other programmers to work using the Atmel Studio back-end. So we had not choice but to use the original 'AVRISP mkII'.
But later in Part2 we would explain how to get Avrdude working. After that we were able to use Olimex ISP and USBtiny also on Windows PC as production programmers.

This is mostly a standard programming interface API from Atmel. This programming method can be good for using multiple AVRISP mkII progammers to program several chips using a single PC. However in most cases we end up with one programmer with one board per setup.

[1] Download & Install
In order to use the AVR Studio back-end one first needs to install the Avr Studio itself. We have used AVR Studio v6.2 with Service Pack (1).
Its a big download and a long install.
Also as a caution in case of Windows 8 and beyond the driver install protection feature needs to be disabled. This can be found in another tutorial http://goo.gl/cj4V1J

[2] Running the AVR Studio Back end

First thing that's needed is to add the AVR Studio Back end to the System Path.

The AVR Studio back end is located at
'C:\Program Files (x86)\Atmel\Atmel Studio 6.2\atbackend'
in case of 64bit architectures.

The program used is 'atprogram.exe' which renders the programming API.

Lets look at various commands to check and program the microcontroller. In this case we would use a Arduino UNO with ATmega328p connected to the PC via USB and AVRISP mkII connected to the ISP connector of the board.

a. Check for Programmers connected
'atprogram list'
Here is a template output:
In this case the output shows a AVRISP mkII programmer connected with Serial Number '000200208327' . This serial number is important to distinguish the Programmer

Here is a sample output: 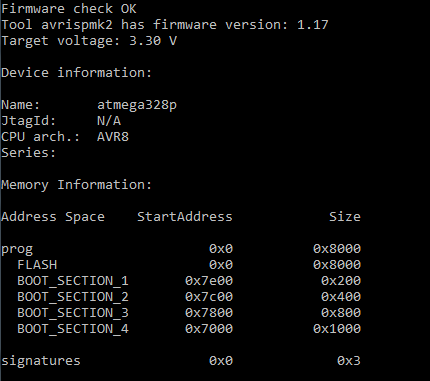 We would recommend this for any one trying to implement a multi platform production setup where the programmer used are not necessarily the AVRISP mkII. The best part is it does not damage or alter the existing Atmel Studio driver compatibility on Windows.

[1] In order to begin with this we have packaged AVRdude for windows with the required driver DLLs and converted into portable setup.

Download the required files as per the machine architecture type - 32bit or 64bit.
We have tested this working on a Windows 7 x64 installation.

[2] Next step is to install the required Driver.
Once the archive mentioned above is extracted we would have a avrdude directory containing the driver directory.
In our case we had the 'driver-amd64' directory since we had x64 bit system.

a. Run the File 'install-filter-win.exe'
b. It would ask for 'User Access Control' Allow it by pressing 'Yes'
c. Select 'Install a device filter' and press 'Next'
d. Next it sows a list of devices 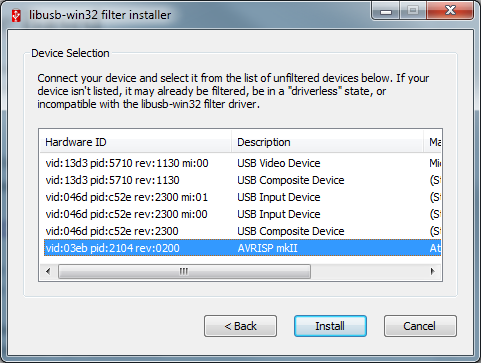 Select the 'AVRISP mkII' since we are using that. Possibly the same can be done for any other programmer connected with USB.
e. Click on 'Install' after selection of the correct Hardware ID.
f. If the driver installation was successful it would show a confirmation screen.
g. Once done with driver instillation the program would again prompt you to select another Hardware ID. If not needed press 'Cancel' to Exit the installer.

[3] Test it out
Now we get to check if every thing went fine or not. For this experiment again we would use a Arduino board connected to the PC via USB and the AVRISP mkII connected to the ISP connector on it.

a. Open a command prompt from Start Menu by typing 'cmd'
b. Go to the 'avrdude' directory where it was extracted.
d. Give the following command to check the presence of the MCU in this case ATmega328p
avrdude -c avrispmkii -P usb -p m328p
Should show the following output:
That's all ! now you have a working setup of Avrdude.

This works for all types of programmers that would need USB drivers in Windows.
Further it allows you to use the Eclipse environment to develop the AVR code using the AVRgcc windows package.
at 8:33 PM